All weekend long on Cartoon Network, we’re celebrating our favorite teenage superhero with an extra-special Ben 10Athon! The fun begins on Saturday, April 5 at 9 a.m. (ET/PT) with “The Vampire Strikes Back,” the final installment in the Ben 10 Omniverse three-part Monster Planet arc. In this episode, Ben, Rook and Rad Dudesman come face to face with the evil Lord Transyl, a vampire-like alien who can make anyone his loyal slave. But this bad guy’s got another thing coming when Ben breaks out an all-new alien from his Omnitrix arsenal – WHAMPIRE! 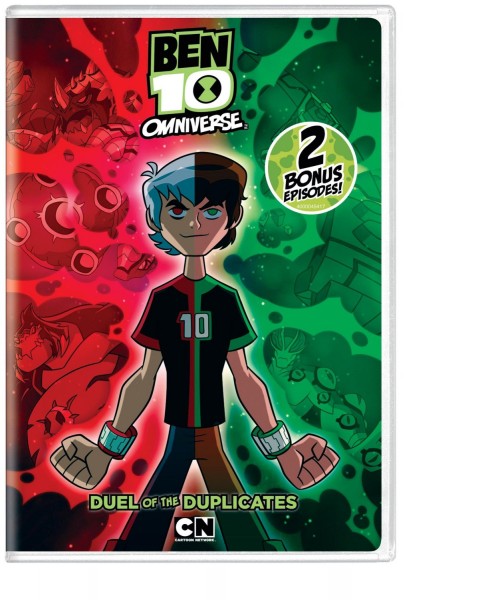 To help celebrate the special on-air event, Cartoon Network Enterprises is launching an all-new DVD, Ben 10 Omniverse: Duel of the Duplicates. Available April 8, 2014, the latest home entertainment adventure includes the three-part story arc from the series’ first season – “The Ultimate Heist,” “A Fistful of Brains” and “For a Few Brains More”- wherein the trio works together to stop Albedo from absorbing Azmuth’s intelligence. Two action-packed bonus episodes – “Evil’s Encore” and “Return to Forever” are also included on the Ben 10 Omniverse: Duel of the Duplicates DVD, which will be available for a suggested retail price of $14.97. Additionally, we are offering a free sneak-peek of an upcoming episode on iTunes, and past seasons from all Ben 10 series are on sale through April 8. Check out the Ben 10 iTunes page here.

As always, this is till one of my son’s favorite shows. And mine, and my dads! I love when there is a show that we can all enjoy together, this has been that show for many years now!

Disclosure: We received this DVD for review. All opinions are always 100% honest and our own!